Do you think you can only learn about leadership in your office? Think again.

On a recent 200-mile through-hike from the West Coast of the United Kingdom to the East Coast along the William Wainwright route called Coast2Coast, I received some leadership lessons I had not anticipated. More accurately, some old lessons had to be relearned the hard way, and there were definitely some new ones.

Have you ever done a through-hike? I hadn’t. I have done plenty of hiking in the Alps and the Sierra Nevada in California, in Patagonia and in Ecuador, but I have never done a hike over hundreds of miles from place to place. In my article Stop Making Work All About You, I outlined why I was called to do this and how I prepared for the trip. Suffice it to say it took months of planning and preparation.

The anxiety about whether I would be able to do this successfully gave way to the excitement of finally being at the starting point. Watching other hikers with their gear on the bus as my daughter and I made our way to the beginning brought to mind lesson number one:

Plenty of hikers go on solo trips and do just fine. And yet I quickly realized that I wouldn’t have wanted to do this by myself. I realized that it would be hard at times, even right at the beginning. Getting dropped off in wind and rain with 200 miles ahead of us and not knowing where to go was anxiety-inducing. 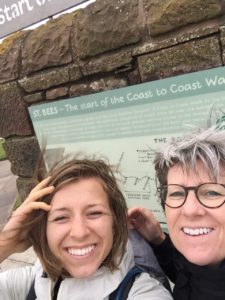 Partner with someone to keep you motivated and moving, no matter what the goal. Without a partner it would have been easy to not go at all, stop after the first day, stop when the going got tough, stop when there was a boring stretch in the middle. I needed the other to keep me motivated, to hold me accountable, to help me across a river, to keep me company and to witness the journey with me. I highly recommend a partner for the journey.

2) Separate Tasks According to Skills

I have always been a-big-picture kind of person. I need to know where I am going and I can see how to get there. What I am not so good at are the minutiae. My daughter, on the other hand, is very good at step-by-step instructions. I had purchased a set of maps which I thought were great.

They outlined exactly the route for each day in a separate section. I could clearly see where we were supposed to go. We realized quickly, though, that the map was not nearly detailed enough. It wouldn’t tell us to turn left after the stile and cross the little footbridge rather than walk along the river. After three days of struggling (and getting lost a few times resulting in extra miles) someone recommended a guidebook only available in the UK.

In it were extremely detailed descriptions of where we would have to turn or what landmark we needed to look out for. We had realized that the signage in the Lake District of the UK is sometimes nonexistent. Who knew? There was only one problem with the book. If you missed just one turn described, you were totally lost because there weren’t any descriptions of how to get back on the path. I found this utterly frustrating. My daughter, on the other hand, really took to those instructions. From then on she was in charge of the detailed steps out of the book and I kept us on the path to the day’s goal.

How often do you run into this problem at work? You are not good at everything and neither are your team members. Discover and be clear as to who is good at what and split up the responsibilities accordingly. You can save yourself a lot of hassle.

This trip was more like a marathon than a sprint. Exhaustion and fatigue would set in after miles of climbing and descending. I soon realized that I was much slower going up the hills than my daughter. She happily took the lead. Other times it was my turn to make decisions. We both had to surrender at times. You don’t have to be the leader all of the time. Sometimes it is quite appropriate to surrender and let someone else take the lead. 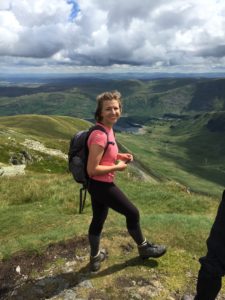 4) Know Where You Are

This was a huge lesson for me. Knowing where you want to go is only part of a winning strategy! I am always very goal-oriented. Naturally knowing where our next little milestone was seemed crucial to me. However, when you find yourself on a fell (grass hill) in the clouds with wind and rain and no visibility in any direction and no landmarks to speak off, not even a trail, (because it just ended!) it is not always clear where you are. “Are we at this bend in the river or the next one?” Depending on the answer to this question the next decision could be completely different. More than once we thought we were at the top of one hill only to find out later that we were at the top of a completely different hill. It sounds silly, I know. But it’s the truth. I did have a compass, two in fact, but I didn’t have a GPS. I would highly recommend one, if you ever try to hike the C2C.

5) Don’t Take Anything For Granted

At one point about two thirds of the way to reach Robin Hood’s Bay, my daughter and I had accommodations that were five miles off the C2C. We had been instructed to call from the local pub and get a ride to the Bed and Breakfast we had reserved. Once we were being chauffeured, we realized we hadn’t sat in a car for 14 days straight! What a luxury. It was a smooth, fast, and comfortable way to get to the B&B. I want to hold on to the notion that a car is a luxury. I know some of my friends living in cities don’t have cars and rely heavily on public transportation, but relying solely on your own mode of transportation by walking is an entirely different level of self-sufficiency. I will never take a car for granted again.

What are you taking for granted? Your computer? Your office? Your assistant? Your boss?

It seems this leadership lesson should be in the front of the article. However, I was already talking about preparation before the trip in the Stop Making Work All About You article.

You can never really know what you will need on a trip like this before you go. You can anticipate and plan, but sometimes the preparation goes out the window and you need to adjust. For example, I had strongly resisted carrying hiking poles. I have never used them for hikingbefore, even in the Alps, and I didn’t want to be burdened with yet another ‘thing.’ I wanted to travel light. What I didn’t anticipate was the challenge of navigating bogs. On the first day I stepped into a bog and ended up being knee-deep in mud. Some fellow hikers managed to get stuck up to their waists. Sometimes bogs were obvious to spot, but other times they were covered by a patch of grass and you couldn’t tell how deep you would sink. That’s why after three days I bought a walking stick. And I discarded it in the middle of the trip, when it seemed the boggiest stretches were behind us. Along the way we changed gear, strategy, course, mindsets, etc. When you do a hike like this over multiple days you don’t know what will happen. And you need to adjust in the moment.

7) Be Conscious of the Tempo

My daughter is quite fit; she is also 32 years younger than I am. At times I thought I was following a mountain goat she climbed up the hills so fast. The more climbing, the better and the happier she was. And there I was, slow and steady, making it up the hill. Both of us had to hike the same distance. We just did it at different speeds.

Have you ever felt like a dinosaur in the presence of some of the millennials that are working for you? They are often working at different speeds. Are you one of those millennials impatient with the one that came before you? Being aware of different working styles and speeds and adjusting how you respond to them is crucial to building a high performing team.

One of the most rewarding aspects of the through-hike was the opportunity to meet new people, locals and hikers alike. We had a great time exchanging ideas about which path to take and where everyone was headed. We tag teamed with a couple from England for almost a week and connected so well, I know we will stay in touch. Sometimes you just meet those sorts of people. We stayed open and made friends along the way. Isn’t that what our work environment offers us as well? The chance to meet all kinds of people and build long lasting relationships? Sometimes I think we are moving too fast to recognize what is right in front of us. Staying open and welcoming to strangers is not always easy but always rewarding. 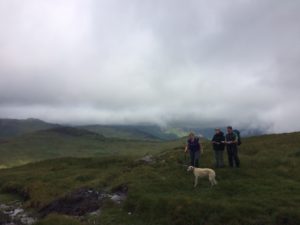 9) Allow Others to Witness

I am not the biggest proponent of Facebook and social media. However, I decided early on to attempt to post one picture every day of the journey. I soon realized there were a number of people who tuned in regularly and they cheered us on. They appreciated the images and short stories along the way and in return they supported us by witnessing. If you were one of those — thank you! It made a huge difference. It enlarged the conversation and allowed us to feel supported in our endeavor. It felt as if we were riding a wave.

Who do you give permission to witness your journey? You have to allow others to be there for you when you are embarking on a challenge. Michael Phelps just recently achieved his 23rd Olympic Gold Medal, supported by a huge roar of support in the stadium. We tend to dismiss cheerleaders in our lives, but let’s not deny the power of an authentic witness.

If you found this article useful and inspiring, feel free to check out the article about why we were called to hike the C2C. You might also find the article about how to successfully return to your normal life useful.