If I hadn’t already figured it out, I recently learned that leadership lessons are everywhere. And leadership styles vary.

For this executive coach, that means even in a concert hall. 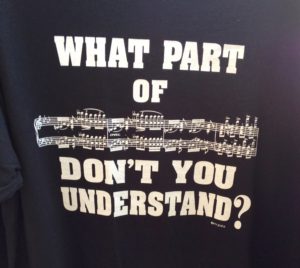 Sitting in the front row of Davies Symphony Hall in San Francisco gave me a unique opportunity to observe Michael Tilson Thomas’ leadership up close. He has been music director of the San Francisco Symphony for the last 20 years and has a much deserved following. Here is what I learned about leadership by observing him:

1) Tell people what you will tell them

When I purchased the tickets I was surprised to learn there would be a 30-minute lecture prior to the performance. I didn’t know what to expect, but since I am a lifelong learner, I was curious to see what the lecture would be like. It is quite common to get a write-up about the composer and the performers in the playbill, but the lecture added an element of depth I wasn’t anticipating; I was delighted by it. Not only were we told about the lives of the composers and the context in which they composed their pieces, we also got some recorded samples of certain phrases, which would then make it easier to understand the pieces during the actual performance. It set the scene for true audio pleasure. You didn’t need to ‘figure’ it out, you could just marvel at the flow of the music. This was a perfect example of telling the audience what you will tell them, before you tell them, but in a different way. Well done, indeed!

The first piece was Brandenburg Concerto No. 3 in G major by Johann Sebastian Bach. The piece was performed by only string instruments and I was surprised to find out there was no conductor at the podium. However, there was no absence of a leader. Instead of the conductor,the first violin was in charge. What a great example of delegated leadership in absence of the maestro.

Just because composers wrote pieces for certain instruments doesn’t mean that one can’t include an element of surprise. In this case a section of the piece was played by a harpsicord and not a violin. In today’s world of entrepreneurship, one might call this disruptive. The different instrument introduced a shift, which wasn’t even revealed in the lecture. However, we were told to anticipate it so we were all listening for what the choice would be. Great change management. Tell people there will be change, and don’t spoil the surprise.

The second piece performed was called Ice Field composed by Henry Brant in 2001. It was composed specifically for Davies Symphony Hall in San Francisco and there aren’t even any recordings of Ice Field. Instruments were strewn in different sections of the symphony hall; only the strings and the organ were on the front stage. Michael Tilson Thomas did a beautiful job introducing the various instrument sections with humor, since not all of them could be seen depending on where one sat. What I found most remarkable was the last statement he made, which went something like this: “We have given a lot of unique performances, but this one is probably the most out there.” What a way to take risks. He knew they were taking a chance and, listening to some of the comments in the ladies’ room immediately following the piece, the risk taken was not well received by some. But I give him credit for taking it and sticking with it. How can we possibly evolve if we never expose ourselves to something new?

5) Give people an experience

As mentioned above, the orchestra for this piece was spread around the concert hall, giving the audience a completely new experience. Not more of the same and not something one could listen to on a recording at home. On the contrary, there is no known recording of this piece anywhere. Thereby, Thomas provided a one-of-a-kind experience. Fabulous!

Also unexpected was Cameron Carpenter, a world-renowned organist, who doesn’t exactly fit the image of the stereotypical classical musician. His Mohawk and leather pants were in stark contrast to the suits and ties of the rest of the orchestra. Way to mix things up, be original and perform with confidence. I loved it. As a matter of fact I was inspired and curious, so I spent quite some time watching a number of YouTube videos with Carpenter, a master of his craft. Way to inspire.

Leadership requires a view with a vision, a view from an elevated stance. Selecting the pieces, creating an experience, leading the orchestra, and guiding the audience through 2.5 hours of entertainment is not as easy as it might seem. One cannot conduct a piece, project, or change process from being in the crowd; it calls for being above and ahead. The leadership demonstrated was palpable to me. Amazing what one can observe from 30,000 feet above or by looking at the impact down the road.

8) Know the key is in the transitions

Have you ever watched a conductor? There are sections where seemingly not much is going on and yet at other times the gestures and the facial expressions, the movement, becomes ever so pronounced. This heightened communication happens mostly during the transitions, when things change. How many times have you found yourself in some sort of change process and communication seems to come to a screeching halt? It heightens the fear and leaves one hanging with lots of unknowns. As leaders, when things are changing, communication needs to be ramped up. And since we are in an increasingly fast changing world, it needs to be stepped up way beyond what we think is needed.

A few seats over from my seat was a young adult who caught my attention. As I was watching him, I noticed that he was conducting the pieces as well. The expression on his face was pure joy! He was riveted by the performance and had no qualms about making his delight known. I don’t want to make any assumptions, and yet I figured that he must have been somewhere on the autism spectrum. I found it fascinating how he could express his enjoyment. And even more fascinating was the fact that Michael Tilson Thomas and the orchestra were able to engage on such a deep level with him and the audience. How remarkable. How many speeches or presentations have you endured that didn’t move you one bit? This one moved people and deserves credit for a job well done.

What a beautiful phrase MTT left me with — “What happens when the music stops?” The concert lasted a little over two hours, but the experience has stayed with me. Isn’t that what we want our customers to walk away with? Isn’t that what we want our employees and our shareholders to walk away with? Therefore, I must ask you, the leader: What happens when YOUR music stops?